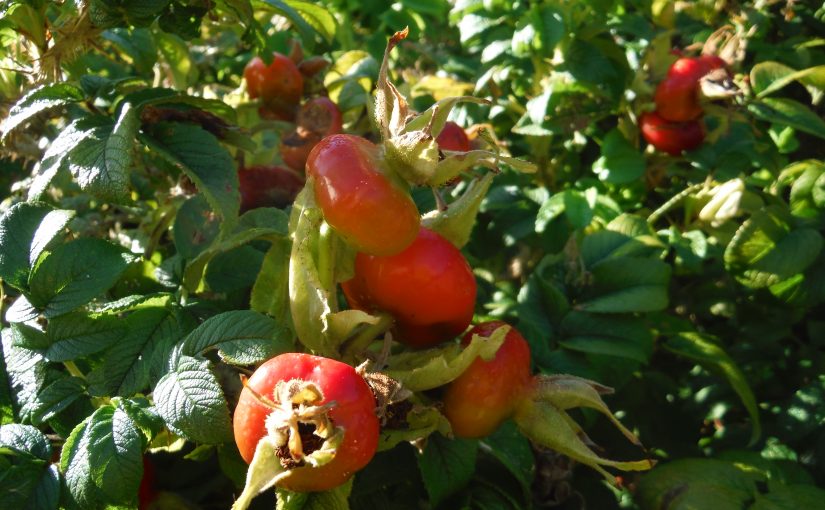 It’s that time of year. The wild rose bushes, aka Sea Roses, all across the coast of Maine, are starting to die down. Why is that good? Because it means the seed pods, those beautiful red rose hips, are ready for harvesting. Foraging rose hips in the wild offers the naturalist an easy way to get a top source of Vitamin C and many other vitamins and minerals.

Get Started with Foraging Rose Hips

When approaching wild roses, you want to have long sleeves, pants, gloves and shoes that cover those precious toes. You’ll know the hips are ready to be harvested when they are bright red and easily plucked from the bush. You will also notice the plant has begun to brown and the leaves are starting to die off. This is the beginning of rose hip season. So pluck away and gather the desired amount of rose hips. 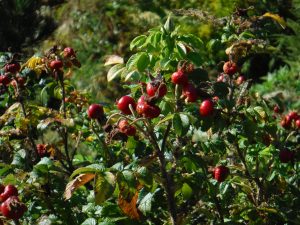 Harvesting Without the Seeds

Some folks prefer to get the seeds out of the rose hips before drying or otherwise preserving the herbs. This is because there are tiny hairs on the seeds that sometimes can irritate the digestive tract. I haven’t experienced this personally, but I wanted to give both methods so you can get the hips ready just the way you like them.

I’ve eaten raw rose hips before and the seeds are rather fibrous and chewy. They’d probably be a lot better roasted or otherwise cooked. I dry the rose hips with the seeds still in them, but by the time I drink rose hip tea, the seeds have been cooked slightly and the taste is fine.

To  prepare your rose hips with no seeds, first take off the stems: 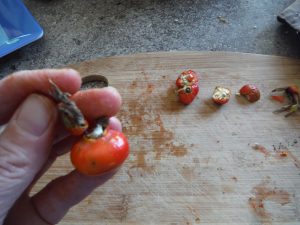 Then, cut them in half and scoop out the seeds with a grapefruit spoon or a knife. After that, chop up the hips for better drying. 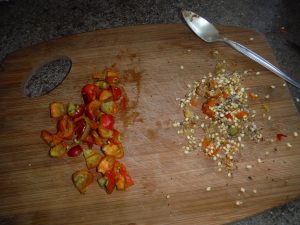 Harvesting & Drying With the Seeds

If the tiny seed hairs don’t bother you, conceivably you could dry the rose hips whole, just the way they are. But the larger hips would take a lot longer and may start to rot before completely drying. Drying them whole works fine with the tiny rose hips. With the larger hips, chop them up as shown below. 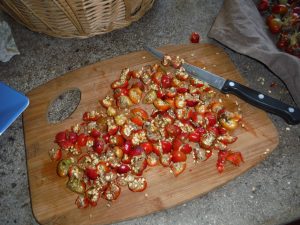 How to Dry Foraged Rose Hips

While many people dry their rose hips using a dehydrator, I am a minimalist when it comes to appliances. Maybe that just comes with the territory of living in a solar house! I like to spread the cut up hips on a plate and put them in my gas oven, using only the pilot light, not even turning it on. Two days later, my hips will be dry and crisp and ready for storage in a night mason jar. In the photo below, you’ll see whole rose hips chopped up on the bottom, and on the top rack, some de-seeded and chopped rose hips along with some bee balm I had in there at the same time. 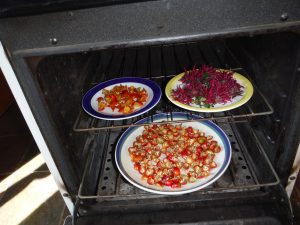 Then, to add some air circulation, I stick a wooden spoon in the oven door like this: 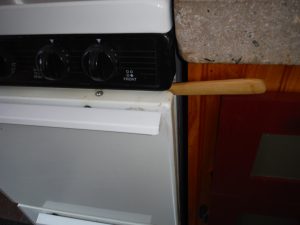 Properly dried, meaning crisp, rose hips will last years. But you’ll want to use them, especially during the winter and the cold & flu season. Loaded with Vitamin C, rose hips also boast high amounts of Vitamin A, Calcium and Iron. Simmer a few teaspoons of the herb for 15 minutes and enjoy the delicious citrousy taste!