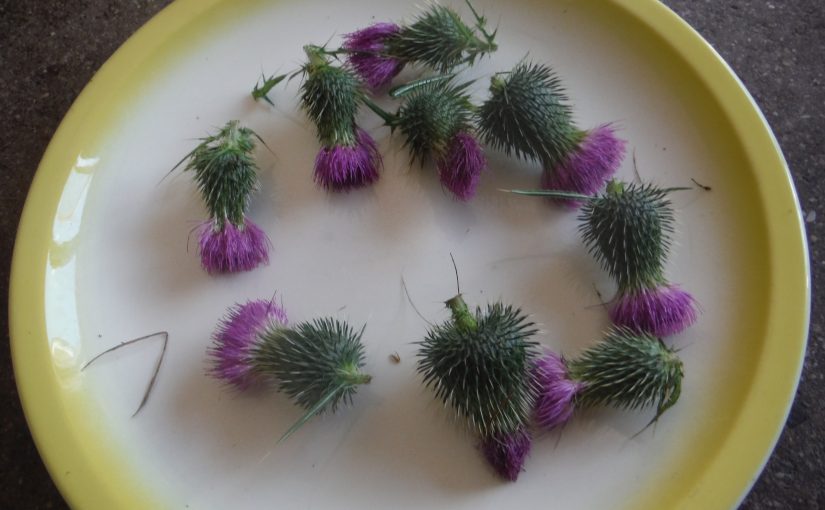 I did some experimenting with wild Milk Thistle this afternoon. I managed to figure out one way to harvest and separate the delicious nuts and seeds from the thistle flowers. It’s not an easy task, I will admit. But here’s one method of doing it without impaling yourself many times over.

Discovering Milk Thistle in the Yard

Ever since moving to this house in June, I have been noticing the prickle bushes growing along the edges between the meadow and the woods. I was not disappointed when they indeed grew up and turned out to be one of nature’s healthiest herbs for liver detoxification. Here’s one of the bushes I harvested today: 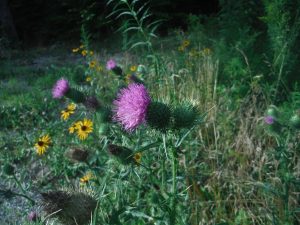 A few weeks ago, when the blossoms first opened, I attempted to get to the nuts inside. These are located directly at the base of the flower surrounded and protected by sharp and pain-inducing barbs. Garden gloves are no help, unless you have some that are made of mithril! At that point I merely used scissors to cut the flowers at their base. Then I let them drop to the ground and when I was done, I gathered them onto a plate. 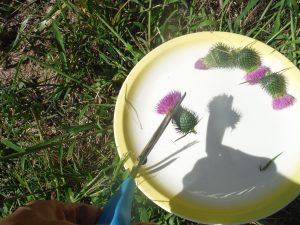 At this point you can pull out the flowers, carefully holding the thistle with the scissors, and eventually get to the nut at the bottom. During late summer, the light feathery down is already starting to form inside the flower. Pull this out as well and then you can see the nut. 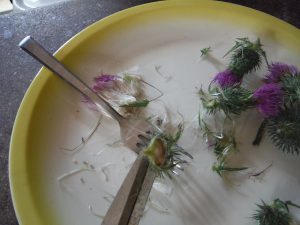 After going through this process again today to get one nut, I decided to try and streamline the process. I had heard if you cook down the Milk Thistle plant, all parts, even the barbs, are edible. So I steamed the flowers for ten minutes. 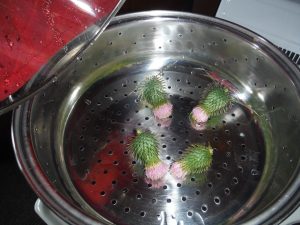 After steaming, the flowers lost quite a bit of their color. And contrary to information I’d found on the web, the prickles were just as prickly. I would not eat one of those babies whole if you paid me. They were a bit softer, though and easier to cut, this time I tried cutting length-wise: 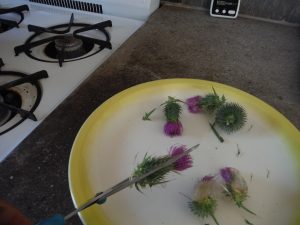 This seemed easier and I was able to get the nut out more quickly for sure this way. In the picture below, the scissors are pointing to exactly where the nut is. Below that is a picture of the nut alone after getting it out using the scissors and my fingers, carefully, oh so carefully. 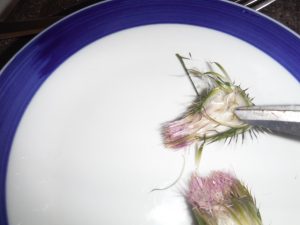 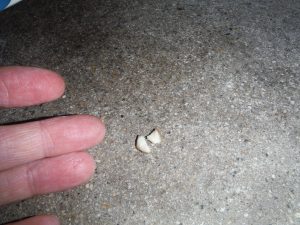 Seems like a lot of work for a small amount of food, but they do taste delicious. By the way, I liked the steamed nuts better, they tasted a bit like asparagus to me, while the raw seeds reminded me a bit of pine nuts.

What About the Milk Thistle Seeds?

While I was in the process of finding and harvesting these nuts, I also got a good glimpse of the seeds. The nut is the root of the seeds in the Milk Thistle plant. Basically, this feathery soft down grows out of the nut, with a little seed at the very base, which you see quite well here: 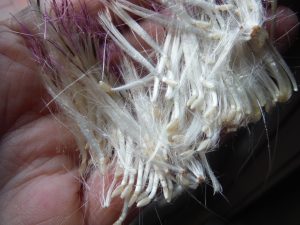 The seeds are usually separated and dried in a paper bag for several weeks and then stored. Later, they can be ground in a coffee grinder and added to smoothies or any food you want, made into a tea or tincture, or made into capsules. My guess is, seeing that the whole plant is edible, is that tincturing the whole plant may be the best bet as far as saving time and getting the most medicinal and nutritional benefits from this amazing plant.